Provide us with a few details and we’ll give you an estimated price for the service you need.

Speak to an expert

Fill in your details below and one of our dedicated specialists will contact you shortly. 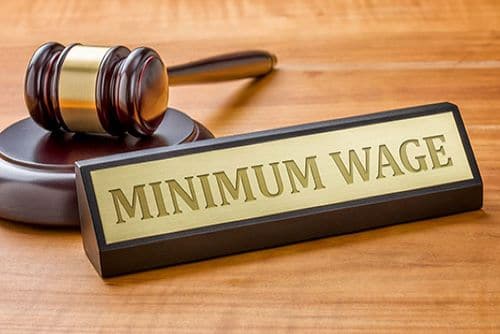 Ontario’s Progressive Conservative government announced on November 2, 2021, that it plans to introduce a bill that would increase the general minimum wage in the province from $14.35 to $15.00 per hour from January 1, 2022.

What other changes have been proposed?

Are other special minimum wage rates also proposed to increase?

Yes. The proposed legislation intends to increase the minimum wage rates for:

Students: Those under 18 who work 28 hours a week or less when school is in session or work during school break or summer holidays would see their minimum wage go up from $13.50 to $14.10 an hour.

Homeworkers: (those who do paid work out of their own homes for employers) The special minimum wage for this section of workers would go up from $15.80 an hour to $16.50 an hour.

What is minimum wage?

Minimum wage is the lowest wage an employer can legally pay their staff. The employer is free to offer greater compensation if they’d like, but they cannot pay less than the minimum wage set down in their jurisdiction’s Employment Standards Act (ESA).

All employees – full-time, part-time, casual, those paid an hourly rate, commission, piece rate, flat rate or salary – are eligible for minimum wage. If an employee’s pay is based entirely or partly on commission, it must amount to at least the minimum wage for each hour the employee has worked.

Some industries, however, are exempted from the minimum wage provisions of the ESA.

The minimum wage rates in Ontario increase on October 1 every year. The new rates that apply from October 1 are announced on or before April 1 of every year.

The Ontario minimum wage increased from $14.25 per hour to $14.35 per hour on October 1, 2021. This change is expected to stay in effect till September 30, 2022, unless the proposed legislation is passed by the legislative assembly and receives royal assent before this date.

Do you have questions related to employee pay?

Our experts can help you with company policies and with any HR, health and safety and employment advice you may need. To learn more, call an expert today at 1 (833) 247-3652.

This website uses cookies to improve your experience while you navigate through the website. Out of these, the cookies that are categorized as necessary are stored on your browser as they are essential for the working of basic functionalities of the website. We also use third-party cookies that help us analyze and understand how you use this website. These cookies will be stored in your browser only with your consent. You also have the option to opt-out of these cookies. But opting out of some of these cookies may affect your browsing experience.
Necessary Always Enabled
Necessary cookies are absolutely essential for the website to function properly. These cookies ensure basic functionalities and security features of the website, anonymously.
Functional
Functional cookies help to perform certain functionalities like sharing the content of the website on social media platforms, collect feedbacks, and other third-party features.
Performance
Performance cookies are used to understand and analyze the key performance indexes of the website which helps in delivering a better user experience for the visitors.
Analytics
Analytical cookies are used to understand how visitors interact with the website. These cookies help provide information on metrics the number of visitors, bounce rate, traffic source, etc.
Advertisement
Advertisement cookies are used to provide visitors with relevant ads and marketing campaigns. These cookies track visitors across websites and collect information to provide customized ads.
Others
Other uncategorized cookies are those that are being analyzed and have not been classified into a category as yet.
SAVE & ACCEPT